It has been widely proven that social media and the compulsion to stare at phones and not faces is a leading cause of depression and anxiety for most modern humans. In my humble opinion, I think it will ultimately lead to the downfall of humanity, but I digress.

I think most people are aware of this fact (it’s fucking everywhere), but are faced with the conundrum of how to “stay in touch” while intentionally disconnecting. But here’s the ultimate irony. When you’re “connected” on social media you’re disconnected in reality. If you’re someone who would prefer living in reality rather than a Black Mirror episode, then this matters.

A couple of weeks ago while talking to my mom, she asked about an old friend from elementary school. I immediately replied, “oh yea, we keep in touch,” which is totally not fucking true.at.all. The only way I know anything about her is from stalking the fuck out of her on Instagram (she’s a babe). So, basically while scrolling through the inferno of Instagram, I have been telling myself that I am “keeping in touch” with people that I had actually not communicated with decades. This delusional sense of connection is what disturbed me the most.

I don’t want to live my life and maintain my relationships through a screen. To do so is far easier, but also less rewarding. Having both real and “virtual” relationships is possible, they are not mutually exclusive, but if given the chance to interact with real people in real time, why would you do anything else?

So, I deleted my personal Instagram account to force myself to actually call/text/email people that I thought about. I know, it sounds basic, but I have successfully reached out to more people since being off it than I have in years. That said, I have never really been a big use of social media in my personal life since I do it as a profession and at the end of the day – I want nothing less than to look at a screen.

Ultimately, I decided to keep @ColoradoWhiteGirl profile because it’s the only way to find this blog – but also because most of my following are strangers who I don’t give a shit about (I’m sure the feeling is mutual). Therefore, I simply post and then forget it. Hopefully, someone gets a chuckle or a “hmm” – that’s good enough.

I tend to do things to the extreme, but I don’t think that’s the only solution. But, if you think about your favorite people to stalk on Instagram (omit the famous ones unless you actually know them), think about the last time you actually talked to them.

Does your time on Instagram make you happy or cause you stress? If you feel like it’s all detracting/distracting from real life or from being fully present, consider if the trade off is worth it. What are you giving, versus what are you receiving.

You can’t be here and also there. That is mutually exclusive. 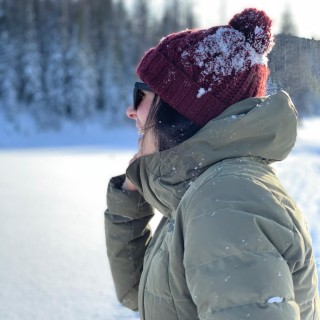 I'm a lover of sociology, writing, photography, mountains, popcorn & peanut butter pie (not together). I'm a believer that compassion is my purpose and that life is too short to take yourself too seriously.